Flurazepam hydrochloride is chemically 7-chloro-1-[2(diethylamino)ethyl]-5-(o-fluorophenyl)-1,3-dihydro-2H-1,4-benzodiazepin-2-one dihydrochloride. It is a pale yellow, crystalline compound, freely soluble in alcohol and very soluble in water. It has a molecular weight of 460.81 and the following structural formula: 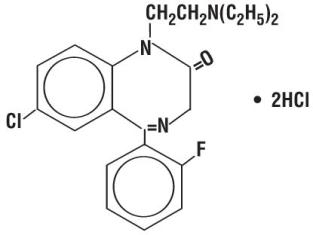 Flurazepam hydrochloride is rapidly absorbed from the G.I. tract. Flurazepam is rapidly metabolized and is excreted primarily in the urine. Following a single oral dose, peak flurazepam plasma concentrations ranging from 0.5 to 4.0 ng/mL occur at 30 to 60 minutes post-dosing. The harmonic mean apparent half-life of flurazepam is 2.3 hours. The blood level profile of flurazepam and its major metabolites was determined in man following the oral administration of 30 mg daily for 2 weeks. The N1-hydroxyethyl-flurazepam was measurable only during the early hours after a 30 mg dose and was not detectable after 24 hours. The major metabolite in blood was N1-desalkyl-flurazepam which reached steady-state (plateau) levels after 7 to 10 days of dosing, at levels approximately five- to sixfold greater than the 24-hour levels observed on Day 1. The half-life of elimination of N1-desalkyl-flurazepam ranged from 47 to 100 hours. The major urinary metabolite is conjugated N1-hydroxyethyl-flurazepam which accounts for 22 to 55 percent of the dose. Less than 1% of the dose is excreted in the urine as N1-desalkyl-flurazepam.

The pharmacokinetic profile may be responsible for the clinical observation that flurazepam is increasingly effective on the second or third night of consecutive use and that for one or two nights after the drug is discontinued both sleep latency and total wake time may still be decreased.

Flurazepam hydrochloride is a hypnotic agent useful for the treatment of insomnia characterized by difficulty in falling asleep, frequent nocturnal awakenings, and/or early morning awakening. Flurazepam hydrochloride can be used effectively in patients with recurring insomnia or poor sleeping habits, and in acute or chronic medical situations requiring restful sleep. Sleep laboratory studies have objectively determined that flurazepam hydrochloride is effective for at least 28 consecutive nights of drug administration. Since insomnia is often transient and intermittent short-term use is usually sufficient. Prolonged use of hypnotics is usually not indicated and should only be under-taken concomitantly with appropriate evaluation of the patient.

Flurazepam hydrochloride is contraindicated in patients with known hypersensitivity to the drug.

Usage in Pregnancy: Benzodiazepines may cause fetal damage when administered during pregnancy. An increased risk of congenital malformations associated with the use of diazepam and chlordiazepoxide during the first trimester of pregnancy has been suggested in several studies.

Flurazepam hydrochloride is contraindicated in pregnant women. Symptoms of neonatal depression have been reported; a neonate whose mother received 30 mg of flurazepam hydrochloride nightly for insomnia during the 10 days prior to delivery appeared hypotonic and inactive during the first four days of life. Serum levels of N1-desalkyl-flurazepam in the infant indicated transplacental circulation and implicate this long-acting metabolite in this case. If there is a likelihood of the patient becoming pregnant while receiving flurazepam, she should be warned of the potential risks to the fetus. Patients should be instructed to discontinue the drug prior to becoming pregnant. The possibility that a woman of childbearing potential may be pregnant at the time of institution of therapy should be considered.

Because sleep disturbances may be the presenting manifestation of a physical and/or psychiatric disorder, symptomatic treatment of insomnia should be initiated only after a careful evaluation of the patient. The failure of insomnia to remit after 7 to 10 days of treatment may indicate the presence of a primary psychiatric and/or medical illness that should be evaluated. Worsening of insomnia or the emergence of new thinking or behavior abnormalities may be the consequence of an unrecognized psychiatric or physical disorder. Such findings have emerged during the course of treatment with sedative-hypnotic drugs. Because some of the important adverse effects of sedative-hypnotics appear to be dose related (see Precautions and Dosage and Administration), it is important to use the smallest possible effective dose, especially in the elderly.

Other complex behaviors (e.g., preparing and eating food, making phone calls, or having sex) have been reported in patients who are not fully awake after taking a sedative-hypnotic. As with sleep-driving, patients usually do not remember these events.

Rare cases of angioedema involving the tongue, glottis or larynx have been reported in patients after taking the first or subsequent doses of sedative-hypnotics, including flurazepam hydrochloride. Some patients have had additional symptoms such as dyspnea, throat closing, or nausea and vomiting that suggest anaphylaxis. Some patients have required medical therapy in the emergency department. If angioedema involves the tongue, glottis or larynx, airway obstruction may occur and be fatal. Patients who develop angioedema after treatment with flurazepam hydrochloride should not be rechallenged with the drug.

Patients receiving flurazepam hydrochloride should be cautioned about possible combined effects with alcohol and other CNS depressants. Also, caution patients that an additive effect may occur if alcoholic beverages are consumed during the day following the use of flurazepam hydrochloride for nighttime sedation. The potential for this interaction continues for several days following discontinuance of flurazepam, until serum levels of psychoactive metabolites have declined.

Patients should also be cautioned about engaging in hazardous occupations requiring complete mental alertness such as operating machinery or driving a motor vehicle after ingesting the drug, including potential impairment of the performance of such activities which may occur the day following ingestion of flurazepam hydrochloride.

Usage in Children: Clinical investigations of flurazepam hydrochloride have not been carried out in children. Therefore, the drug is not currently recommended for use in persons under 15 years of age.

Since the risk of the development of over-sedation, dizziness, confusion and/or ataxia increases substantially with larger doses in elderly and debilitated patients, it is recommended that in such patients the dosage be limited to 15 mg. If flurazepam hydrochloride is to be combined with other drugs having known hypnotic properties or CNS-depressant effects, due consideration should be given to potential additive effects.

The usual precautions are indicated for severely depressed patients or those in whom there is any evidence of latent depression; particularly the recognition that suicidal tendencies may be present and protective measures may be necessary.

The usual precautions should be observed in patients with impaired renal or hepatic function and chronic pulmonary insufficiency.

“Sleep-Driving” and other complex behavior:

There have been reports of people getting out of bed after taking a sedative-hypnotic and driving their cars while not fully awake, often with no memory of the event. If a patient experiences such an episode, it should be reported to his or her doctor immediately, since “sleep-driving” can be dangerous. This behavior is more likely to occur when sedative-hypnotics are taken with alcohol or other central nervous system depressants (see WARNINGS). Other complex behaviors (e.g., preparing and eating food, making phone calls, or having sex) have been reported in patients who are not fully awake after taking a sedative-hypnotic. As with sleep-driving, patients usually do not remember these events.

Following single-dose administration of flurazepam, the elimination half-life for desalkyl-flurazepam was longer in elderly male subjects compared with younger male subjects, while values between elderly and young females were not significantly different. After multiple dosing, elimination half-life of desalkyl-flurazepam was longer in all elderly subjects compared with younger subjects, and mean steady-state serum concentrations were higher only in elderly male subjects relative to younger subjects (see CLINICAL PHARMACOLOGY: Geriatric Pharmacokinetics ).

Geriatric Use: Since the risk of the development of oversedation, dizziness, confusion and/or ataxia increases substantially with larger doses in elderly and debilitated patients, it is recommended that in such patients the dosage be limited to 15 mg. Staggering and falling have also been reported, particularly in geriatric patients.

Abuse and addiction are separate and distinct from physical dependence and tolerance. Abuse is characterized by misuse of the drug for non-medical purposes, often in combination with other psychoactive substances. Physical dependence is a state of adaptation that is manifested by a specific withdrawal syndrome that can be produced by abrupt cessation, rapid dose reduction, decreasing blood level of the drug and/or administration of an antagonist. Tolerance is a state of adaptation in which exposure to a drug induces changes that result in a diminution of one or more of the drug's effects over time. Tolerance may occur to both the desired and undesired effects of the drug and may develop at different rates for different effects.

Addiction is a primary, chronic, neurobiological disease with genetic, psychosocial, and environmental factors influencing its development and manifestations. It is characterized by behaviors that include one or more of the following: impaired control over drug use, compulsive use, continued use despite harm, and craving. Drug addiction is a treatable disease, utilizing a multidisciplinary approach, but relapse is common.

Flurazepam Hydrochloride Capsules are classified by the Drug Enforcement Administration as a Schedule IV controlled substance.

Withdrawal symptoms, similar in character to those noted with barbiturates and alcohol (e.g., convulsions, tremor, abdominal and muscle cramps, vomiting, and sweating), have occurred following abrupt discontinuance of flurazepam. The more severe withdrawal symptoms have usually been limited to those patients who received excessive doses over an extended period of time. Generally milder withdrawal symptoms (e.g., dysphoria and insomnia) have been reported following abrupt discontinuance of benzodiazepines taken continuously at therapeutic levels for several months. Consequently, after extended therapy, abrupt discontinuation should generally be avoided and a gradual dosage tapering schedule followed. Addiction-prone individuals (such as drug addicts or alcoholics) should be under careful surveillance when receiving flurazepam or other psychotropic agents because of the predisposition of such patients to habituation and dependence.

Manifestations of flurazepam hydrochloride overdosage include somnolence, confusion and coma. Respiration, pulse and blood pressure should be monitored as in all cases of drug overdosage. General supportive measures should be employed, along with immediate gastric lavage. Intravenous fluids should be administered and an adequate airway maintained. Hypotension and CNS depression may be combated by judicious use of appropriate therapeutic agents. The value of dialysis has not been determined. If excitation occurs in patients following flurazepam hydrochloride overdosage, barbiturates should not be used. As with the management of intentional overdosage with any drug, it should be borne in mind that multiple agents may have been ingested.

Dosage should be individualized for maximal beneficial effects. The usual adult dosage is 30 mg before retiring. In some patients, 15 mg may suffice. In elderly and/or debilitated patients, 15 mg is usually sufficient for a therapeutic response and it is therefore recommended that therapy be initiated with this dosage.