Sedative and Analgesic for Use in Horses and Cervidae (Fallow Deer, Mule Deer, Sika Deer, White-Tailed Deer and Elk)

CAUTION: Federal law restricts this drug to use by or on the order of a licensed veterinarian.

Do not use in Cervidae less than 15 days before or during the hunting season.

AnaSed® is supplied in 50 mL multiple-dose vials as a sterile solution.

Xylazine should be used in horses and Cervidae (Fallow Deer, Mule Deer, Sika Deer, White-Tailed Deer and Elk) when it is desirable to produce a state of sedation accompanied by a shorter period of analgesia.

Horses: Xylazine has been used successfully as follows:

Cervidae: Xylazine may be used for the following:

This drug should not be administered to domestic food-producing animals.

Do not use in horses intended for human consumption.

Avoid accidental administration to humans. Should such exposure occur, notify a physician immediately. Artificial respiration may be indicated.

In Cervidae, occasional capture-associated deaths occur. Clinical trials reveal a mortality rate of approximately 3.5% attendant with the administration of xylazine.

Careful consideration should be given before administering to horses and Cervidae with significantly depressed respiration, severe pathologic heart disease, advanced liver or kidney disease, severe endotoxic or traumatic shock and stress conditions such as extreme heat, cold, high altitude or fatigue.

Do not use xylazine in conjunction with tranquilizers.

Analgesic effect is variable, and depth should be carefully assayed prior to surgical/clinical procedures. Variability of analgesia occurs most frequently at the distal extremities of horses and Cervidae. In spite of sedation, the practitioner and handlers should proceed with caution since defense reactions may not be diminished.

Intracarotid Arterial Injection Should Be Avoided.

As with many compounds, including tranquilizers, immediate violent seizures followed by collapse may result from inadvertent administration into the carotid artery. Although the reaction with xylazine is usually transient and recovery may be rapid and complete, special care should be taken to assure that the needle is in the jugular vein rather than the carotid artery.

Horses: Since an additive effect results from the use of xylazine and the barbiturate compounds, it should be used with caution with these central nervous system depressants. Products known to produce respiratory depression or apnea, such as thiamylal sodium should be given at a reduced dosage and when injected intravenously, should be administered slowly. When intravenous administration is desired, avoid perivascular injection in order to achieve the desired effect. Studies have shown negligible evidence of tissue irritation, however, following perivascular injection of xylazine.

Bradycardia and an arrhythmia in the form of incomplete atrioventricular block have been reported following xylazine administration. Although clinically the importance of this effect is questioned,1,2,3,4 a standard dose of atropine given prior to or following xylazine will greatly decrease the incidence.

Sedation for transport is most successful if actual transportation is begun after the full effect of the drug has been reached and the animal's stability is maintained while standing. In addition, it should be noted that animals under the influence of xylazine can be aroused by noise or other stimuli and this may increase the risk of injury.

Cervidae: It is preferable to administer AnaSed® to fasted Cervidae. As in all ruminants a safeguard against aspiration of food material into the lungs and/or bloat during deep sedation is necessary.

Care should be taken to administer AnaSed® in the heavy muscles of the croup or shoulder. Injections given subcutaneously, intraperitoneally or into fat deposits will give unpredictable results.

Cervidae should not be disturbed during induction or until the full effect of the drug has been reached which is usually 10 to 15 minutes following injection. The usual time to initial effect of the drug is 2 to 5 minutes. The administrator of the drug should be fully cognizant of this interval prior to administration of drug to free-ranging deer or elk, especially at night or in heavily wooded areas.

If the animal has been underdosed (faulty injection or miscalculation on weight) it is advisable to wait one hour before administering a second dose.

Adequate ventilation — especially in cages or crates is mandatory; keep head and neck in position to insure patent air passage and to prevent aspiration of stomach contents.

During sedation Cervidae should be prevented from assuming lateral recumbency. A sternal recumbent position is desirable.

While under the effects of xylazine, the animal should be protected from an extremely hot or cold environment. Efforts should be made to prevent patient from rising until almost complete recovery is attained.

The transportation of Cervidae given AnaSed® should be carefully monitored to prevent excessive struggling, injury or death.

Hyperthermic reactions may occur, especially if the subject is in a highly excited psychic state when the drug is administered. Hosing the head and entire body with cold water has usually proven to be an effective deterrent.

Data are presently inadequate to recommend AnaSed®'s use in pregnant Cervidae. Avoid use during breeding season.

Cervidae should be observed closely until all of the sedative effects of AnaSed® are gone.

Care should be taken at all times when administering AnaSed® to Cervidae. This is due to the method of administration (usually darting), the difficulty in estimating body weights and the accepted theory that wild animals are more unpredictable in their response to sedatives and analgesics than the domesticated species.

Xylazine in horses and Cervidae used at recommended dosage levels may occasionally cause slight muscle tremors, bradycardia with partial A-V heart block and a reduced respiratory rate. Movement in response to sharp auditory stimuli may be observed. In horses, sweating, rarely profuse, has been reported following administration. In Cervidae, salivation, various vocalizations (bellowing, bleating, groaning, grunting, snoring) on expiration, audible grinding of molar teeth, protruding tongue and elevated temperatures have also been noted in some cases.

Xylazine, a non-narcotic compound, is a sedative and analgesic as well as a muscle relaxant. Its sedative and analgesic activity is related to central nervous system depression. Its muscle-relaxant effect is based on inhibition of the intraneural transmission of impulses in the central nervous system. The principal pharmacological activities develop within 10 to 15 minutes after intramuscular injection in horses and Cervidae, and within 3 to 5 minutes following intravenous administration in horses.

A sleeplike state, the depth of which is dose-dependent, is usually maintained for 1 to 2 hours, while analgesia lasts from 15 to 30 minutes. The centrally acting muscle-relaxant effect causes relaxation of the skeletal musculature complementing sedation and analgesia.

In horses and Cervidae under the influence of xylazine, the respiratory rate is reduced as in natural sleep. Following treatment with xylazine, the heart rate is decreased and a transient change in the conductivity of the cardiac muscle may occur, as evidenced by a partial atrioventricular block. This resembles the atrioventricular block often observed in normal horses.1,2,3,4 Although a partial A-V block may occasionally occur following intramuscular injection of xylazine, the incidence is less than when it is administered intravenously. Intravenous administration of xylazine causes a transient rise in blood pressure, followed by a slight decrease.

Xylazine has no effect on blood clotting time or other hematologic parameters.

For Horses and Cervidae

CAUTION: Federal law restricts this drug to use by or on

For Horses and Cervidae

to use by or on the order of a

Do not use in Cervidae less than 15 days

before or during the hunting season. 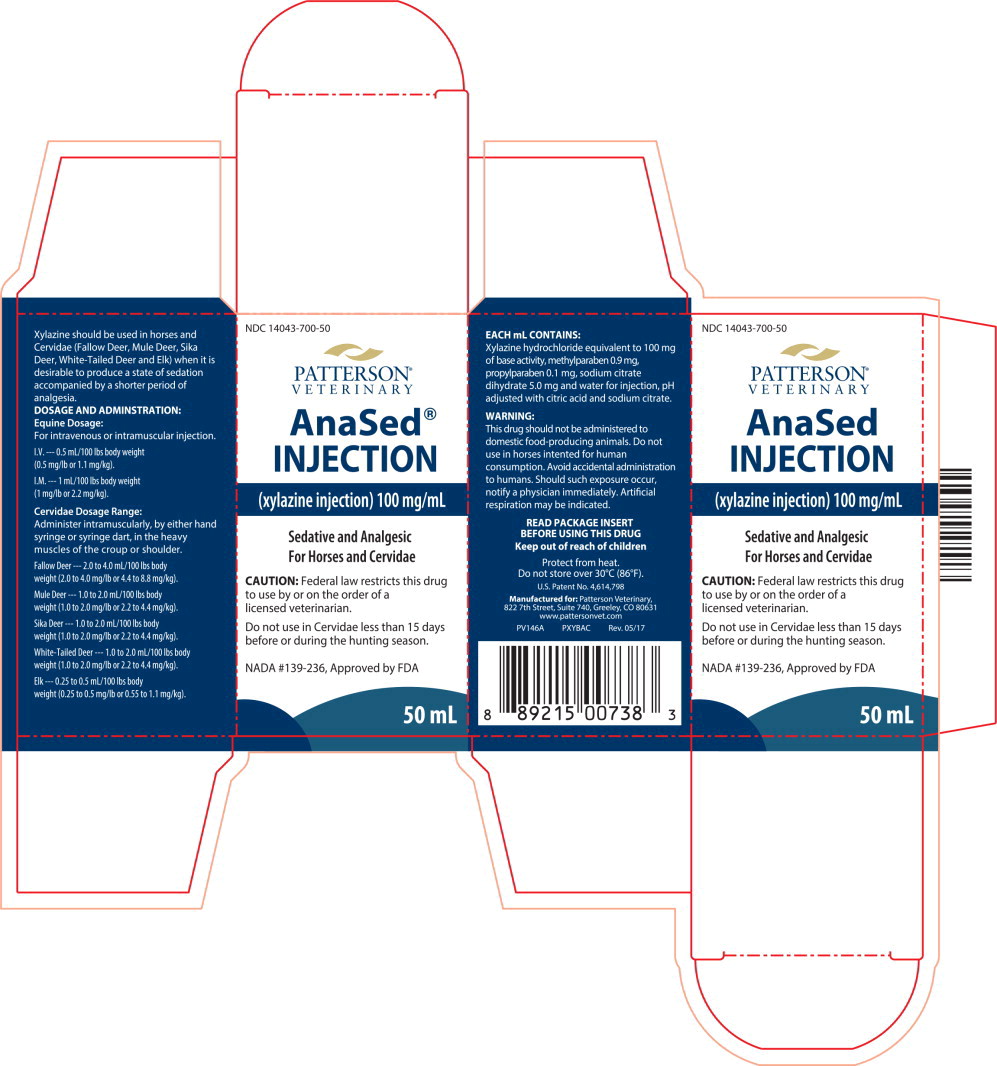