Acetaminophen and codeine is supplied in tablet form for oral administration.

Acetaminophen, 4’-hydroxyacetanilide, a slightly bitter, white, odorless, crystalline powder, is a non-opiate, non-salicylate analgesic and antipyretic. It has the following structural formula: 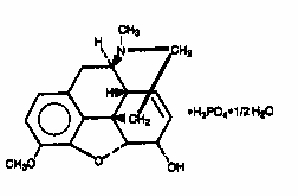 (Warning: May be habit forming)

Codeine is readily absorbed from the gastrointestinal tract. It is rapidly distributed from the intravascular spaces to the various body tissues, with preferential uptake by parenchymatous organs such as the liver, spleen and kidney. Codeine crosses the blood-brain barrier, and is found in fetal tissue and breast milk. The plasma concentration does not correlate with brain concentration or relief of pain; however, codeine is not bound to plasma proteins and does not accumulate in body tissues.

The plasma half-life is about 2.9 hours. The elimination of codeine is primarily via the kidneys, and about 90% of an oral dose is excreted by the kidneys within 24 hours of dosing. The urinary secretion products consist of free and glucuronide conjugated codeine (about 70%), free and conjugated norcodeine (about 10%), free and conjugated morphine (about 10%), normorphine (4%), and hydrocodone (1%). The remainder of the dose is excreted in the feces.

At therapeutic doses, the analgesic effect reaches a peak within 2 hours and persists between 4 and 6 hours.

Acetaminophen and codeine phosphate tablets are indicated for the relief of mild to moderately severe pain.

This product should not be administered to patients who have previously exhibited hypersensitivity to codeine or acetaminophen.

In the presence of head injury or other intracranial lesions, the respiratory depressant effects of codeine and other narcotics may be markedly enhanced, as well as their capacity for elevating cerebrospinal fluid pressure. Narcotics also produce other CNS depressant effects, such as drowsiness, that may further obscure the clinical course of the patients with head injuries.

Codeine or other narcotics may obscure signs on which to judge the diagnosis or clinical course of patients with acute abdominal conditions.

Codeine is habit-forming and potentially abusable. Consequently, the extended use of this product is not recommended.

Acetaminophen and codeine phosphate tablets should be prescribed with caution in certain special-risk patients, such as the elderly or debilitated, and those with severe impairment of renal or hepatic function, head injuries, elevated intracranial pressure, acute abdominal conditions, hypothyroidism, urethral stricture, Addison’s disease, or prostatic hypertrophy.

Codeine may impair mental and/or physical abilities required for the performance of potentially hazardous tasks such as driving a car or operating machinery. Such tasks should be avoided while taking this product.

Codeine may be habit-forming. Patients should take the drug only for as long as it is prescribed, in the amounts prescribed, and no more frequently than prescribed.

This drug may enhance the effects of: other narcotic analgesics, alcohol, general anesthetics, tranquilizers such as chlordiazepoxide, sedative-hypnotics, or other CNS depressants, causing increased CNS depression.

Acetaminophen and codeine have been found to have no mutagenic potential using the Ames Salmonella-Microsomal Activation test, the Basc test on Drosophila germ cells, and Micronucleus test on mouse bone marrow.

A study in rats and rabbits reported no teratogenic effect of codeine administered during the period of organogeneses in doses ranging from 5 to 120 mg/kg. In the rat, doses at the 120 mg/kg level, in the toxic range for the adult animal, were associated with an increase in embryo resorption at the time of implantation. In another study a single 100 mg/kg dose of codeine administered to pregnant mice reportedly resulted in delayed ossification in the offspring.

There are no adequate and well-controlled studies in pregnant women. Acetaminophen and codeine phosphate should be used during pregnancy only if the potential benefit justifies the potential risk to the fetus.

Dependence has been reported in newborns whose mothers took opiates regularly during pregnancy. Withdrawal signs include irritability, excessive crying, tremors, hyperreflexia, fever, vomiting, and diarrhea. These signs usually appear during the first few days of life.

Narcotic analgesics cross the placental barrier. The closer to delivery and the larger the dose used, the greater the possibility of respiratory depression in the newborn. Narcotic analgesics should be avoided during labor if delivery of a premature infant is anticipated. If the mother has received narcotic analgesics during labor, newborn infants should be observed closely for signs of respiratory depression. Resuscitation may be required (see OVERDOSAGE:). The effect of codeine, if any, on the later growth, development, and functional maturation of the child is unknown.

Acetaminophen and codeine are excreted in breast milk in small amounts, but the significance of their effects on nursing infants is not known. Because of the potential for serious adverse reactions in nursing infants from acetaminophen and codeine, a decision should be made whether to discontinue nursing or to discontinue the drug, taking into account the importance of the drug to the mother.

The most frequently reported adverse reactions are drowsiness, lightheadedness, dizziness, sedation, shortness of breath, nausea and vomiting. These effects seem to be more prominent in ambulatory than in non-ambulatory patients, and some of these adverse reactions may be alleviated if the patient lies down.

At higher doses codeine has most of the disadvantages of morphine including respiratory depression.

Acetaminophen and Codeine Phosphate tablets are classified as a Schedule III controlled substance.

Codeine can produce drug dependence of the morphine type and, therefore, has the potential for being abused. Psychological dependence, physical dependence. and tolerance may develop upon repeated administration and it should be prescribed and administered with the same degree of caution appropriate to the use of other oral narcotic medications.

Following an acute overdosage, toxicity may result from codeine or acetaminophen.

Toxicity from codeine poisoning includes the opioid triad of: pinpoint pupils, depression of respiration, and loss of consciousness. Convulsions may occur.

In adults hepatic toxicity has rarely been reported with acute overdoses of less than 10 grams, or fatalities with less than 15 grams.

A single or multiple overdose with acetaminophen and codeine is a potentially lethal polydrug overdose, and consultation with a regional poison control center is recommended.

Immediate treatment includes support of cardiorespiratory function and measures to reduce drug absorption. Vomiting should be induced mechanically, or with syrup of ipecac, if the patient is alert (adequate pharyngeal and laryngeal reflexes). Oral activated charcoal (1 g/kg) should follow gastric emptying. The first dose should be accompanied by an appropriate cathartic. If repeated doses are used, the cathartic might be included with alternate doses as required. Hypotension is usually hypovolemic and should respond to fluids. Vasopressors and other supportive measures should be employed as indicated. A cuffed endo-tracheal tube should be inserted before gastric lavage of the unconscious patient and, when necessary, to provide assisted respiration.

Naloxone, a narcotic antagonist, can reverse respiratory depression and coma associated with opioid overdose. Naloxone hydrochloride 0.4 mg to 2 mg is given parenterally. Since the duration of action of codeine may exceed that of the naloxone, the patient should be kept under continuous surveillance and repeated doses of the antagonist should be administered as needed to maintain adequate respiration. A narcotic antagonist should not be administered in the absence of clinically significant respiratory or cardiovascular depression.

Dosage should be adjusted according to severity of pain and response of the patient.

The usual adult dosage is:

The usual dose of codeine phosphate in children is 0.5 mg/kg.

Doses may be repeated up to every 4 hours.

It should be kept in mind, however, that tolerance to codeine can develop with continued use and that the incidence of untoward effects is dose related. Adult doses of codeine higher than 60 mg fail to give commensurate relief of pain but merely prolong analgesia and are associated with an appreciably increased incidence of undesirable side effects. Equivalently high doses in children would have similar effects.