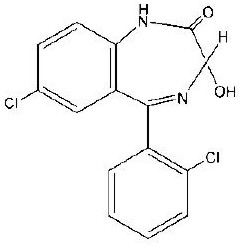 It is a white or almost white crystalline powder almost insoluble in water. Each lorazepam tablet, to be taken orally, contains 0.5 mg, 1 mg, or 2 mg of lorazepam, USP. The inactive ingredients present are lactose monohydrate, microcrystalline cellulose, polacrilin potassium and sodium stearyl fumarate.

Studies comparing young and elderly subjects have shown that the pharmacokinetics of lorazepam remain unaltered with advancing age.

Lorazepam tablets are indicated for the management of anxiety disorders or for the short-term relief of the symptoms of anxiety or anxiety associated with depressive symptoms. Anxiety or tension associated with the stress of everyday life usually does not require treatment with an anxiolytic.

The effectiveness of lorazepam tablets in long-term use, that is, more than 4 months, has not been assessed by systematic clinical studies. The physician should periodically reassess the usefulness of the drug for the individual patient.

Lorazepam tablets are contraindicated in patients with known sensitivity to benzodiazepines or with acute narrow-angle glaucoma.

Lorazepam is not recommended for use in patients with a primary depressive disorder or psychosis. As with all patients on CNS-active drugs, patients receiving lorazepam should be warned not to operate dangerous machinery or motor vehicles and that their tolerance for alcohol and other CNS depressants will be diminished.

Withdrawal symptoms, similar in character to those noted with barbiturates and alcohol (convulsions, tremor, abdominal and muscle cramps, vomiting, and sweating), have occurred following abrupt discontinuance of lorazepam. The more severe withdrawal symptoms have usually been limited to those patients who received excessive doses over an extended period of time. Generally milder withdrawal symptoms (e.g., dysphoria and insomnia) have been reported following abrupt discontinuance of benzodiazepines taken continuously at therapeutic levels for several months. Consequently, after extended therapy, abrupt discontinuation should generally be avoided and a gradual dosage-tapering schedule followed. Addiction-prone individuals (such as drug addicts or alcoholics) should be under careful surveillance when receiving lorazepam or other psychotropic agents because of the predisposition of such patients to habituation and dependence.

In patients with depression accompanying anxiety, a possibility for suicide should be borne in mind.

For elderly or debilitated patients, the initial daily dosage should not exceed 2 mg in order to avoid oversedation.

The usual precautions for treating patients with impaired renal or hepatic function should be observed.

The benzodiazepines, including lorazepam, produce CNS-depressant effects when administered with such medications as barbiturates or alcohol.

Adverse reactions, if they occur, are usually observed at the beginning of therapy and generally disappear on continued medication or upon decreasing the dose. In a sample of about 3,500 anxious patients, the most frequent adverse reaction to lorazepam is sedation (15.9%), followed by dizziness (6.9%), weakness (4.2%), and unsteadiness (3.4%). Less frequent adverse reactions are disorientation, depression, nausea, change in appetite, headache, sleep disturbance, agitation, dermatological symptoms, eye-function disturbance, together with various gastrointestinal symptoms and autonomic manifestations. The incidence of sedation and unsteadiness increased with age.

Small decreases in blood pressure have been noted but are not clinically significant, probably being related to the relief of anxiety produced by lorazepam.

Transient amnesia or memory impairment has been reported in association with the use of benzodiazepines.

In the management of overdosage with any drug, it should be borne in mind that multiple agents may have been taken.

Include vomiting and/or gastric lavage should be undertaken, followed by general supportive care, monitoring of vital signs, and close observation of the patient.

Hypotension, though unlikely, usually may be controlled with norepinepherine bitartrate injection. The value of dialysis has not been adequately determined for lorazepam. The benzodiazepine antagonist flumazeril may be used in hospitalized patients as an adjunct to, not as a substitute for, proper management of benzodiazepine overdose.

The prescriber should be aware of a risk of seizure in association with flumazenil treatment, particularly in long-term benzodiazepine users and in cyclic antidepressant overdose. The complete flumazenil package insert including CONTRAINDICATIONS, WARNINGS, and PRECAUTIONS should be consulted prior to use.

Lorazepam tablets are administered orally. For optimal results, dose, frequency of administration, and duration of therapy should be individualized according to patient response. To facilitate this, 0.5 mg, 1 mg, and 2 mg tablets are available.

The 0.5 mg tablet is a white to off-white, round, flat-faced, beveled edge tablet debossed with M on one side of the tablet and 321 on the other side. They are available as follows:

The 1 mg tablet is a white to off-white, round, flat-faced, beveled edge tablet debossed with MYLAN above the score and 457 below the score on one side of the tablet and blank on the other side. They are available as follows:

The 2 mg tablet is a white to off-white, round, flat-faced, beveled edge tablet debossed with MYLAN above the score and 777 below the score on one side of the tablet and blank on the other side. They are available as follows: