The active ingredient, sodium fluoride F 18, has the molecular formula of Na18F with a molecular weight of 40.99, and has the following chemical structure:

Sodium Fluoride F 18 Injection is provided as a ready to use sterile, pyrogen-free, clear and colorless solution. Each mL of the solution contains between 0.185 GBq to 17.575 GBq (5 to 475 mCi) fluoride F 18, at the end of synthesis (EOS) reference time, and may contain up to 0.18 mg of sodium chloride. The pH of the solution is between 4.5 to 8.0. The solution does not contain any preservatives. The only known source of nonradioactive fluorine ion present is that found in the distilled water and saline solutions used in preparing this product.

Fluorine F 18 decays by positron (β +) emission and has a half-life of 109.8 minutes. The principal photons useful for diagnostic imaging are the 511 keV gamma photons, resulting from the interaction of the emitted positron with an electron (Table 1).

The specific gamma ray constant for Fluorine F 18 is 6.0 R/hr/mCi (1.35 × 10 -6 Gy/hr/kBq) at 1cm. The half-value layer (HVL) for the 511 keV photons is 4.1 mm lead (Pb). A range of values for the attenuation of radiation results from the interposition of various thickness of Pb. The range of attenuation coefficients for this radionuclide is shown in Table 2. For example, the interposition of an 8.3 mm thickness of Pb with a coefficient of attenuation of 0.25 will decrease the external radiation by 75%.

For use in correcting for physical decay of this radionuclide, the fractions remaining at selected intervals after calibration are shown in Table 3.

Increased fluorine F 18 ion deposition around joints can occur in arthritis or following trauma; increased deposition has also been documented in bone around fracture sites, in osteomyelities, fibrous dysplasia, spondylitis tuberculosa, Paget's disease, hyperstosis frontalis interna, myositis, ossificans, and in rapidly growing epiphyses. The tendency for fluorine F 18 ions to accumulate in the vicinity of primary and metastatic malignancy in bone has proven clinically useful in detection of such lesions (3-10).

In patients with normal renal function, 20% or more of the fluorine F 18 ions are cleared from the body in the urine within the first 2 hours after intravenous administration (3). Subsequently, small amounts of fluorine 18 ions continue to be excreted in the urine further diminishing the radioactivity of the fluorine F 18 ions in soft tissues of the body. (See Pharmacokinetics section)

Drug-drug interactions with Sodium Fluoride F 18 Injection have not been studied.

Radiopharmaceuticals should be used only by personnel (e.g., physicians or radiopharmacists) who are qualified by specific training in the safe use and handling of radioactive drugs and materials. (See Drug Handling section.) In the use of any radiopharmaceutical, care should be taken to ensure minimum radiation exposure to the patient and all personnel involved in the procedure by using the smallest dose of radioactivity consistent with safety and relative value of diagnostic information.

As with other injectable drug products, allergic reactions and anaphylaxis may occur. Emergency resuscitation equipment and personnel should be immediately available.

To minimize the radiation-absorbed dose to the bladder, adequate hydration should be encouraged to stimulate frequent voiding during the first few hours after intravenous administration of Sodium Fluoride F 18 Injection. This may be achieved by having patients drink at least an 8 oz. glass of water prior to drug administration. To help protect themselves and others in their environment, patients should take the following precautions for 12 hours after injection: whenever possible a toilet should be used and should be flushed several times after each use; wash hands thoroughly after each voiding or fecal elimination. If blood, urine, or feces soil clothing, the clothing should be washed separately.

Studies with Sodium Fluoride F 18 Injection have not been performed to evaluate carcinogenic potential, mutagenic potential or effects on fertility.

Fluorine ions are a normal body constituent. The amount of fluorine ions in Sodium Fluoride F 18 Injection at the indicated dose has minimal effect on normal human physiology.

When Sodium Fluoride F 18 Injection was approved for marketing in 1972, no adverse reactions were noted in over 400 patient studies reported in the medical literature. In a 1999 review of the published literature, publicly available reference sources and adverse drug reaction reporting systems indicated that adverse reactions have not been reported for Sodium Fluoride F 18 Injection. However, patients should be appropriately monitored for adverse drug reactions, and such reactions should be reported to FDA, if they occur.

The dose of Sodium Fluoride F 18 Injection used in a given patient should be minimized consistent with the objectives of the study, and the nature of the radiation detection devices employed. (See Radiation Dosimetry section.)

The final dose for the patient should be calculated using proper decay factors from the time of the end of synthesis (EOS), and measured by a suitable radioactivity calibration system before administration. (See decay factors in Table 3.)

Optimally, it is recommended that imaging of Sodium Fluoride F 18 Injection can begin 1 to 2 hours after administration; however, the longer the imaging procedure is delayed, the greater will be the ratio of the activity in bone to that in soft tissue. Voiding immediately prior to imaging the fluorine F 18 biodistribution in the pelvis is recommended to reduce background radioactivity.

Sodium Fluoride F 18 Injection, like other parenteral drug products, should be inspected visually for particulate matter and discoloration before administration, whenever solution and container permit. Sodium Fluoride F 18 Injection preparations containing particulate matter or discoloration should not be administered. They should be disposed of in a safe manner in compliance with applicable regulations.

The contents of each vial are sterile and non-pyrogenic. To maintain sterility, aseptic technique must be used during all operations involved in the manipulation and administration of Sodium Fluoride F 18 Injection.

As with any other radioactive material, appropriate shielding should be used to avoid unnecessary radiation exposure to the patient, occupational workers, and other persons.

Sodium Fluoride F 18 Injection, like other radioactive drugs, must be handled with care, and appropriate safety measures should be used to minimize radiation exposure to clinical personnel. Care should be taken to minimize exposure to the patient consistent with proper patient management. Radiopharmaceuticals should be used by or under the control of physicians who are qualified by specific training and experience in the safe use and handling of radionuclides, and whose experience and training have been approved by the appropriate governmental agency authorized to license the use of radionuclides.

Following are the estimated absorbed radiation doses (rem/mCi) to a human adult (70 kg) from intravenous injection of Sodium Fluoride F 18 Injection. These estimates were calculated based on human data and using the data published by the International Commission on Radiological Protection for Sodium Fluoride F 18 Injection (11). Fluorine F 18 ions decay with a physical halflife of 109.8 minutes. Ninety-seven percent (97%) of the decay results in emission of a positron with a maximum energy of 0.635 MeV, and 3% of the decay results in electron capture with subsequent emission of characteristic X-rays of oxygen. The bone and bone marrow are considered the target and critical organs. The absolute values for absorbed radiation in relation to age have not been established.

This sterile injectable solution is approved by the U.S. Nuclear Regulatory Commission for
distribution to persons licensed to use by-product material identified in
§35.200 to 10 CFR Part 35, to persons who have a similar authorization issued by
an Agreement State, and, outside the United States, to persons authorized by the
appropriate authority.

Storage and disposal of Sodium Fluoride F 18 Injection should be in accordance with the regulations and a general license, or its equivalent, of an Agreement State or a Licensing State.

The expiration date and time are provided on the container label. Sodium Fluoride F18 Injection should be used within 12 hours from the time of the end of synthesis (EOS) reference time. 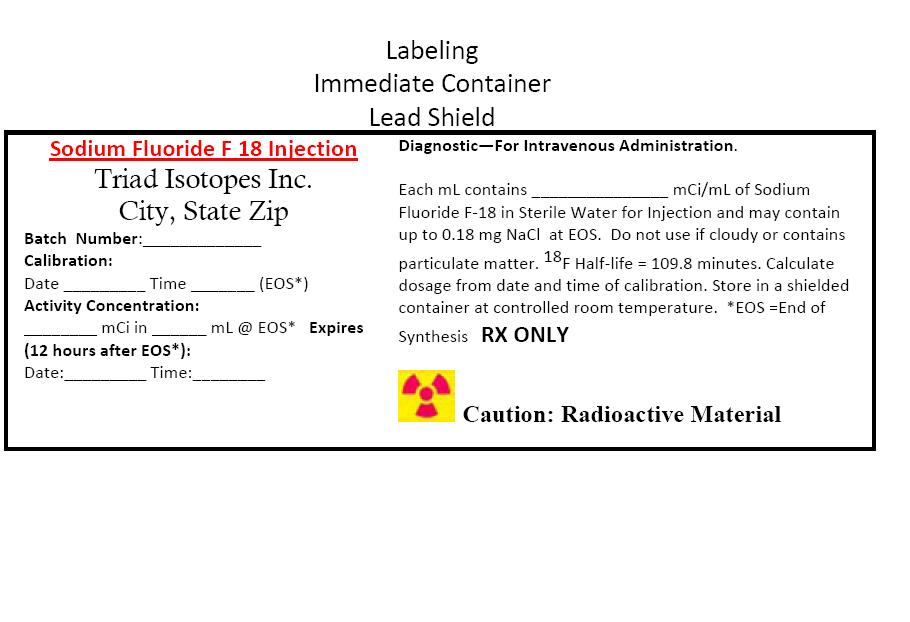