To prevent the development of drug-resistance, LAMPRENE should be used only as a part of combination therapy for initial treatment of lepromatous (multibacillary) leprosy [see Dosage and Administration (2.1)].

For further guidance on the treatment of leprosy, contact the National Hansen’s Disease Clinical Center, Baton Rouge, Louisiana (LA) at (1-800-642-2477) or http://www.hrsa.gov/hansensdisease/clinicalcenter.html.

Administer 100 mg LAMPRENE daily with meals in combination with two other anti-leprosy drugs for at least 2 years and if possible, until negative skin smears are obtained, followed by monotherapy with an appropriate antileprosy drug.

Administer 100 mg LAMPRENE daily with meals in combination with one or more other anti-leprosy drugs for 3 years, followed by monotherapy with 100 mg of LAMPRENE daily.

Administer LAMPRENE at 100 mg to 200 mg daily, in conjunction with baseline anti-leprosy treatment and steroids as clinically indicated. If LAMPRENE is administered at 200 mg dose, taper to 100 mg as soon as possible after the erythema nodosum reaction is controlled. Doses of LAMPRENE of more than 100 mg daily should be given for as short a period as possible and only under close medical supervision [see Warnings and Precautions (5.1)].

2.2       Important Pre-test Prior to Administration

Sexually-active females of reproductive potential should have a pregnancy test prior to LAMPRENE administration [see Use in Specific Populations (8.3)].

Each LAMPRENE capsule contains 50 mg clofazimine in a soft gelatin capsule. The capsules are brown and spherical.

LAMPRENE is contraindicated in patients with known hypersensitivity to clofazimine or any of the excipients of LAMPRENE.

Clofazimine may accumulate in various organs as crystals, including the mesenteric lymph nodes and histiocytes at the lamina propria of the intestinal mucosa, spleen and liver. Deposition in the intestinal mucosa may lead to intestinal obstruction that may necessitate exploratory laparotomy. Splenic infarction, gastrointestinal bleeding, and death have been reported. If a patient complains of pain in the abdomen, nausea, vomiting, or diarrhea, initiate appropriate medical investigations and reduce the daily dose of LAMPRENE, or increase the dosing interval or discontinue the drug. Doses of LAMPRENE of more than 100 mg daily should be given for as short a period as possible (less than 3 months) and only under close medical supervision.

QT prolongation has also been reported in patients who were receiving concomitant LAMPRENE and bedaquiline at the recommended dosages. Monitor ECGs in patients taking LAMPRENE and bedaquiline concomitantly, and discontinue LAMPRENE if clinically significant ventricular arrhythmia is noted or if the QTcF interval is 500 ms or greater. If syncope occurs, obtain an ECG to detect QT prolongation.

5.3       Skin and Body Fluid Discoloration and Other Skin Reactions

Other skin reactions associated with LAMPRENE therapy include ichthyosis, dry skin, and pruritus.

The following serious adverse reactions are discussed in greater detail in other sections of the labeling:

Adverse Reactions Occurring In More Than 1% of Patients

Adverse Reactions Occurring In Less Than 1% of Patients

Concomitant use of LAMPRENE may increase concentrations of drugs that are substrates of CYP3A4/5 [see Clinical Pharmacology (12.3)] which may increase the risk of toxicity of these drugs. Monitor for toxicities of these drugs when used concomitantly with LAMPRENE.

QT prolongation and Torsade de Pointes have been reported in patients receiving LAMPRENE in combination with QT prolonging medications, such as bedaquiline. Monitor ECGs for QT prolongation when LAMPRENE is administered with other drugs known to prolong the QT interval [see Warnings and Precautions (5.2)].

There are no data with LAMPRENE use in pregnant women to inform associated risk. Retardation of fetal skull ossification, increased incidences of abortions and stillbirths, and impaired neonatal survival were observed in mice following prenatal exposure to LAMPRENE at 25 mg/kg, equivalent to the 0.6 times maximum recommended human daily dose (200 mg), based on body surface area comparisons. Advise pregnant women of the potential risk to the fetus.

The skin of infants born to pregnant mothers who had received LAMPRENE during pregnancy is pigmented at birth.

Limited data is available regarding the reversibility of discoloration. Based on previous observations, discoloration gradually faded over the first year.

There are no studies of LAMPRENE use in pregnant women. Few cases of clofazimine use during pregnancy have been reported in the literature. These reports indicate that the skin of infants born to women who had received LAMPRENE during pregnancy was deeply pigmented at birth. LAMPRENE should be used during pregnancy only if the potential benefit justifies the risk to the fetus.

Embryo-fetal toxicity studies were conducted in rats, rabbits and mice. In mice, LAMPRENE-induced embryotoxicity and fetotoxicity was evident. Retardation of fetal skull ossification, increased incidences of abortions and stillbirths, and impaired neonatal survival were observed following prenatal exposure to LAMPRENE at 25 mg/kg, equivalent to the 0.6 times maximum recommended human daily dose [MRHD] (200 mg), based on body surface area comparisons. The skin and fatty tissue of offspring became discolored approximately 3 days after birth, which was attributed to the presence of clofazimine in the maternal milk. No developmental effects were observed in rat or rabbits orally administered clofazimine during organogenesis at doses up to 50 mg/kg and 15 mg/kg,(equivalent to about 2.4 and 1.5 times the MRHD of 200 mg based on body surface area) respectively. These animal studies were conducted according to the standards at the time of initial drug approval (1986) and not under current regulatory standards.

LAMPRENE is excreted in human milk. Skin discoloration has been observed in breast fed neonates of mothers receiving clofazimine.

The developmental and health benefits of breastfeeding should be considered along with the mother’s clinical need for LAMPRENE and any potential adverse effects on the breastfed infant from LAMPRENE or from the underlying maternal condition.

8.3       Females and Males of Reproductive Potential

Sexually-active females of reproductive potential should have a pregnancy test prior to starting treatment with LAMPRENE.

Animal studies have shown LAMPRENE to be harmful to the developing fetus. Advise sexually active females of reproductive potential to use effective contraception (methods that result in less than 1% pregnancy rates) when using LAMPRENE during treatment and for at least 4 months after stopping treatment with LAMPRENE.

Advise males taking LAMPRENE to use a condom during intercourse while on treatment and for at least 4 months after stopping treatment with LAMPRENE.

Impaired female fertility (reduced number of offspring and lower proportion of implantations) was observed in one study in rats receiving LAMPRENE [see Nonclinical Toxicology (13.1)]. There are no non-clinical data on male fertility.

Safety and effectiveness of LAMPRENE in pediatric patients have not been established.

Clinical studies of LAMPRENE did not include sufficient numbers of subjects aged 65 and older to determine whether they respond differently from younger subjects. Other reported clinical experience has not identified differences in responses between the elderly and younger patients. In general, dose selection for an elderly patient should be cautious, usually starting at the low end of the dosing range, reflecting the greater frequency of decreased hepatic, renal, or cardiac function, and of concomitant disease or other drug therapy.

Response to treatment, including treatment of erythema nodosum leprosum reactions, is not altered in HIV-positive and immunocompromised leprosy patients. Dose adjustments of LAMPRENE are not required in these patients.

Avoid LAMPRENE in patients with hepatic impairment (Child-Pugh Class A, B, and C) unless the benefit outweighs the risk.

No specific data are available on the treatment of over dosage with LAMPRENE. However, in case of overdose, the stomach should be emptied by inducing vomiting or by gastric lavage, and supportive symptomatic treatment should be employed.

LAMPRENE (clofazimine) is an antimycobacterial available as soft gelatin capsules for oral administration. Each capsule contains 50 mg of micronized clofazimine suspended in an oil-wax base. Clofazimine is a substituted iminophenazine bright-red dye. Its chemical name is 3-(p-chloroanilino)-10-(p-chlorophenyl)-2, 10-dihydro-2-isopropyliminophenazine, and its structural formula is 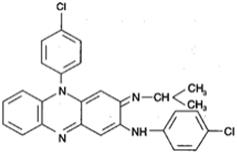 Clofazimine exposure-response relationships and the time course of pharmacodynamics response are unknown.

The average serum concentrations of clofazimine in leprosy patients treated with LAMPRENE 100 mg and 300 mg daily were 0.7 mcg/mL and 1 mcg/mL, respectively.

Clofazimine absorption ranges from 45% to 62% in leprosy patients.

Time to reach peak plasma concentration (median Tmax) of clofazimine decreases from 12 hours to 8 hours under fed conditions relative to the fasted state.

Clofazimine is lipophilic and deposits predominantly in fatty tissue and in cells of the reticuloendothelial system. It is taken up by macrophages throughout the body. In autopsies performed on leprosy patients who had received LAMPRENE, clofazimine crystals were found predominantly in the mesenteric lymph nodes, adrenals, subcutaneous fat, liver, bile, gall bladder, spleen, small intestine, muscles, bones, and skin.

Clofazimine is bound to alpha- and primarily to beta-lipoproteins in serum, and the binding was saturable at plasma concentrations of approximately 10 mcg/mL. Binding to gamma-globulin and albumin was negligible.

The mean elimination half-life of clofazimine is approximately 25 days (range 6.5 to 160 days) following repeated oral doses of 50 or 100 mg LAMPRENE in leprosy patients.

Information on the metabolism of clofazimine is limited. Three clofazimine metabolites were found in urine following repeated oral doses of LAMPRENE.

After a single dose of LAMPRENE 300 mg, elimination of unchanged clofazimine and its metabolites was negligible in a 24-hour urine collection. Part of the ingested drug recovered from the feces may represent excretion via the bile. A small amount is also eliminated in the sputum, sebum, and sweat.

No clinically significant differences in clofazimine pharmacokinetics have been observed when used concomitantly with bedaquiline, cycloserine, dapsone, ethionamide, para-aminosalicylic acid, pyrazinamide, and pyridoxine. In patients receiving high doses of clofazimine (300 mg daily) and isoniazid (300 mg daily), elevated concentrations of clofazimine were detected in plasma and urine, although skin concentrations were found to be lower, however the clinical consequences are unknown.

No clinically significant differences in the pharmacokinetics of the following drugs were observed when used concomitantly with clofazimine: dapsone or rifampicin.

The mechanism of action for the anti-mycobacterial activity of clofazimine can be postulated through its membrane-directed activity including the bacterial respiratory chain and ion transporters. Intracellular redox cycling, involving oxidation of reduced clofazimine, leads to the generation of antimicrobial reactive oxygen species (ROS), superoxide-hydrogen peroxide (H2O2). Secondly, interaction of clofazimine with membrane phospholipids results in the generation of antimicrobial lysophospholipids, which promote membrane dysfunction, resulting in interference with K+ uptake. Both mechanisms result in interference with cellular energy metabolism by disrupting ATP production. Anti-inflammatory activity of clofazimine is primarily through inhibition of T lymphocyte activation and proliferation. Clofazimine may indirectly interfere with the proliferation of T cells by promoting the release of ROS and E-series prostaglandins (PGs), especially PGE2 from neutrophils and monocytes.

Clofazimine does not show cross-resistance with dapsone or rifampin.

13.1       Carcinogenesis, Mutagenesis, and Impairment of Fertility

Long-term carcinogenicity studies in animals have not been conducted with LAMPRENE. Results of mutagenicity studies (Ames test) were negative. There is some evidence of clastogenic potential in mice.

Impaired female fertility (reduced number of offspring and lower proportion of implantations) was observed in one study in rats receiving LAMPRENE (from 9 weeks before mating until weaning) at 50 mg/kg/day, equivalent to about 2.4 times the maximum recommended clinical dose (200 mg), based on body surface area comparisons. No non-clinical data on male fertility are available.