AMPHETAMINES HAVE A HIGH POTENTIAL FOR ABUSE. ADMINISTRATION OF AMPHETAMINES FOR PROLONGED PERIODS OF TIME MAY LEAD TO DRUG DEPENDENCE AND MUST BE AVOIDED. PARTICULAR ATTENTION SHOULD BE PAID TO THE POSSIBILITY OF SUBJECTS OBTAINING AMPHETAMINES FOR NON-THERAPEUTIC USE OR DISTRIBUTION TO OTHERS, AND THE DRUGS SHOULD BE PRESCRIBED OR DISPENSED SPARINGLY. 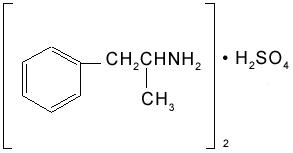 There is neither specific evidence which clearly establishes the mechanism whereby amphetamines produce mental and behavioral effects in children, nor conclusive evidence regarding how these effects relate to the condition of the central nervous system.

The single ingestion of two 5 mg tablets by healthy volunteers produced and average peak dextroamphetamine blood level of 29.2 ng/mL at 2 hours post-administration. The average half-life was 10.25 hours. The average urinary recovery was 45% in 48 hours.

During or within 14 days following the administration of monoamine oxidase inhibitors (hypertensive crises may result).

Caution is to be exercised in prescribing amphetamines for patients with even mild hypertension.

These products contain FD&C Yellow No.5 (tartrazine), which may cause allergic-type reactions (including bronchial asthma) in certain susceptible individuals. Although the overall incidence of hypersensitivity in the general population is low, it is frequently seen in patients who also have aspirin hypersensitivity.

Amphetamines may impair the ability of the patient to engage in potentially hazardous activities such as operating machinery or vehicles; the patient should therefore be cautioned accordingly.

Antidepressants, tricyclic - Amphetamines may enhance the activity of tricyclic or sympathomimetic agents; d-amphetamine with desipramine or protriptyline and possibly other tricyclics cause striking and sustained increases in the concentration of d-amphetamine in the brain; cardiovascular effects can be potentiated.

MAO inhibitors - MAOI antidepressants, as well as a metabolite of furazolidone, slow amphetamine metabolism. This slowing potentiates amphetamines, increasing their effect on the release of norepinephrine and other monoamines from adrenergic nerve endings; this can cause headaches and other signs of hypertensive crisis. A variety of neurological toxic effects and malignant hyperpyrexia can occur, sometimes with fatal results.

Propoxyphene - In cases of propoxyphene overdosage, amphetamine CNS stimulation is potentiated and fatal convulsions can occur.

Mutagenicity studies and long-term studies in animals to determine the carcinogenic potential of DextroStat®(dextroamphetamine sulfate) have not been performed.

Pregnancy Category C. Dextroamphetamine has been shown to have embryotoxic and teratogenic effects when administered to A/Jax mice and C57BL mice in doses approximately 41 times the maximum human dose. Embryotoxic effects were not seen in New Zealand white rabbits given the drug in doses 7 times the human dose nor in rats given 12.5 times the maximum human dose. While there are no adequate and well-controlled studies in pregnant women, there has been one report of severe congenital bony deformity, tracheo-esophageal fistula, and anal atresia (Vater association) in a baby born to a woman who took dextroamphetamine sulfate with lovastatin during the first trimester of pregnancy. Dextroamphetamine should be used during pregnancy only if the potential benefit justifies the potential risk to the fetus.

Infants born to mothers dependent on amphetamines have an increased risk of premature delivery and low birth weight. Also, these infants may experience symptoms of withdrawal as demonstrated by dysphoria, including agitation, and significant lassitude.

Clinical experience suggests that in psychotic pediatric patients, administration of amphetamines may exacerbate symptoms of behavior disturbance and thought disorder.

Data are inadequate to determine whether chronic administration of amphetamines may be associated with growth inhibition; therefore, growth should be monitored during treatment.

Drug treatment is not indicated in all cases of Attention Deficit Disorder with Hyperactivity and should be considered only in light of the complete history and evaluation of the pediatric patient. The decision to prescribe amphetamines should depend on the physician's assessment of the chronicity and severity of the pediatric patient's symptoms and their appropriateness for his/her age. Prescription should not depend solely on the presence of one or more of the behavioral characteristics.

When these symptoms are associated with acute stress reactions, treatment with amphetamines is usually not indicated.

Palpitations, tachycardia, elevation of blood pressure. There have been isolated reports of cardiomyopathy associated with chronic amphetamine use.

Dryness of the mouth, unpleasant taste, diarrhea, constipation, other gastrointestinal disturbances. Anorexia and weight loss may occur as undesirable effects.

Amphetamines have been extensively abused. Tolerance, extreme psychological dependence, and severe social disability have occurred. There are reports of patients who have increased the dosage to many times that recommended. Abrupt cessation following prolonged high dosage administration results in extreme fatigue and mental depression; changes are also noted on the sleep EEG.

Individual patient response to amphetamines varies widely. While toxic symptoms occasionally occur as an idiosyncrasy at doses as low as 2 mg, they are rare with doses of less than 15 mg; 30 mg can produce severe reactions, yet doses of 400 to 500 mg are not necessarily fatal.

In rats, the oral LD50 of dextroamphetamine sulfate is 96.8 mg/kg.

TREATMENT- Consult with a Certified Poison Control Center for up-to-date guidance and advice. Management of acute amphetamine intoxication is largely symptomatic and includes gastric lavage, administration of activated charcoal, administration of a cathartic, and sedation. Experience with hemodialysis or peritoneal dialysis is inadequate to permit recommendation in this regard. Acidification of the urine increases amphetamine excretion, but is believed to increase risk of acute renal failure if myoglobinuria is present. If acute severe hypertension complicates amphetamine overdosage, administration of intravenous phentolamine has been suggested. However, a gradual drop in blood pressure will usually result when sufficient sedation has been achieved.

Amphetamines should be administered at the lowest effective dosage and dosage should be individually adjusted. Late evening doses should be avoided because of the resulting insomnia.

Narcolepsy: Usual dose 5 to 60 mg per day in divided doses, depending on the individual patient response.

Attention Deficit Disorder with Hyperactivity: Not recommended for pediatric patients under 3 years of age.

In pediatric patients from 3 to 5 years of age, start with 2.5 mg; daily dosage may be raised in increments of 2.5 mg at weekly intervals until optimal response is obtained.

In pediatric patients 6 years of age and older, start with 5 mg once or twice daily; daily dosage may be raised in increments of 5 mg at weekly intervals until optimal response is obtained. Only in rare cases will it be necessary to exceed a total of 40 mg per day.

Give first does on awakening: additional doses (1 or 2) at intervals of 4 to 6 hours.

Where possible, drug administration should be interrupted occasionally to determine if there is a recurrence of behavioral symptoms sufficient to require continued therapy.

5 mg Yellow, Round, Scored Tablet debossed "RP" on one side and "51" on the other side.

10 mg Yellow, Round, Double-Scored tablet debossed "RP" on one side and "52" on the other side.

Dispense in a tight container as defined in the USP.